I'm not a risk expert and so, during this pandemic, I have been sharing articles by people who are, instead of writing my own. Specifically content produced by the excellent EndCoronavirus.org initiative (join the volunteer effort here), and as usual when it comes to risk, Nassim Taleb. I chose to publish something this week in order to have some skin-in-the-game (vel-innie-spel for the Afrikaners) by supporting lockdowns and travel bans publicly. I have been in conversation upon conversation where someone has presented the argument that travel bans and lockdowns are a bad idea. Specifically that exponentially more harm will come from their economic consequences than from the current coronavirus pandemic. I am writing this because I would like to make very clear that I hold these positions in utter contempt, specifically when shared by those with an influence over public policy. Strong language? Yes, let me show you why I believe it is appropriate.

We have known since long before any of us were born that deadly contagious diseases can cause pandemics, and that pandemics are an existential threat to our society. They can wipe us out, both by taking lives and by causing second-order effects that prevent our society from functioning. We have known for a long time that contagious diseases are fat-tailed, and have again and again confirmed their massive tail risk. We have known since January that Covid-19 is contagious (R0 > 1) and deadly (deaths in significant number of cases). Therefore we have known since January that we face an existential threat in the form of a Coronavirus Pandemic. Recent data has only confirmed that. 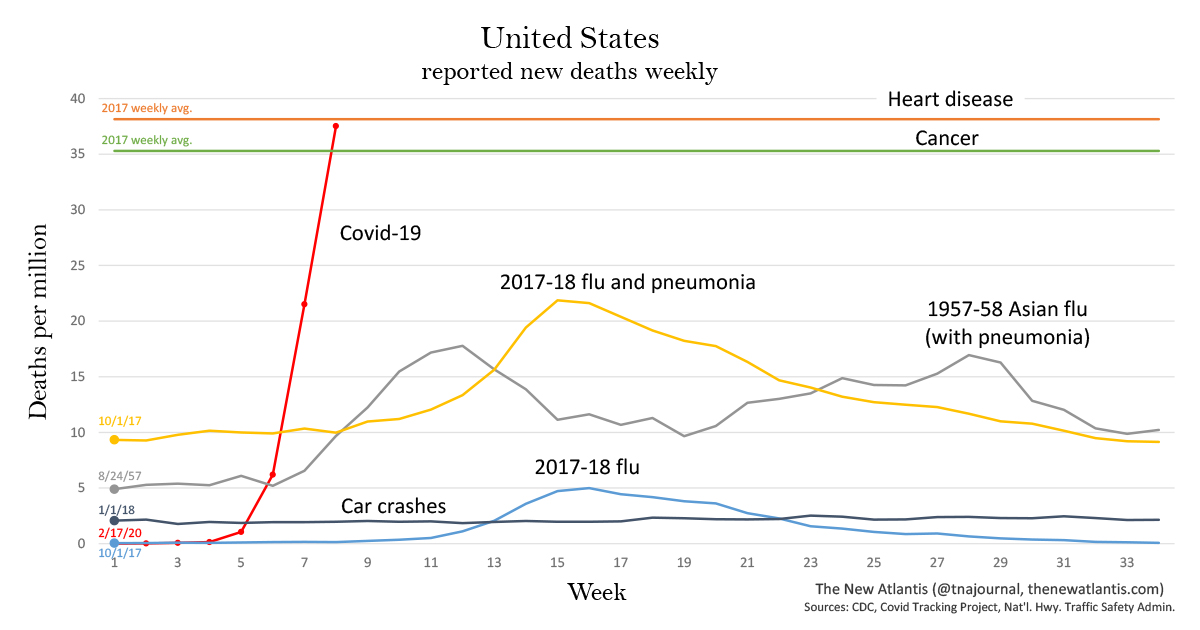 Many acted immediately and accordingly. The paper by Norman, Bar-Yam and Taleb on 26 January already made the required and appropriate action clear. They were not alone, here is the Gabriel Leung that same week. In those early weeks in February some countries listened, most were slow. Some implemented travel bans, most did not. Since then the consequences of those choices have been well documented. The massive success in China limiting the spread of the virus from Hubei to other Chinese provinces providing one of the clearest lessons on the impact of listening to this policy recommendation. 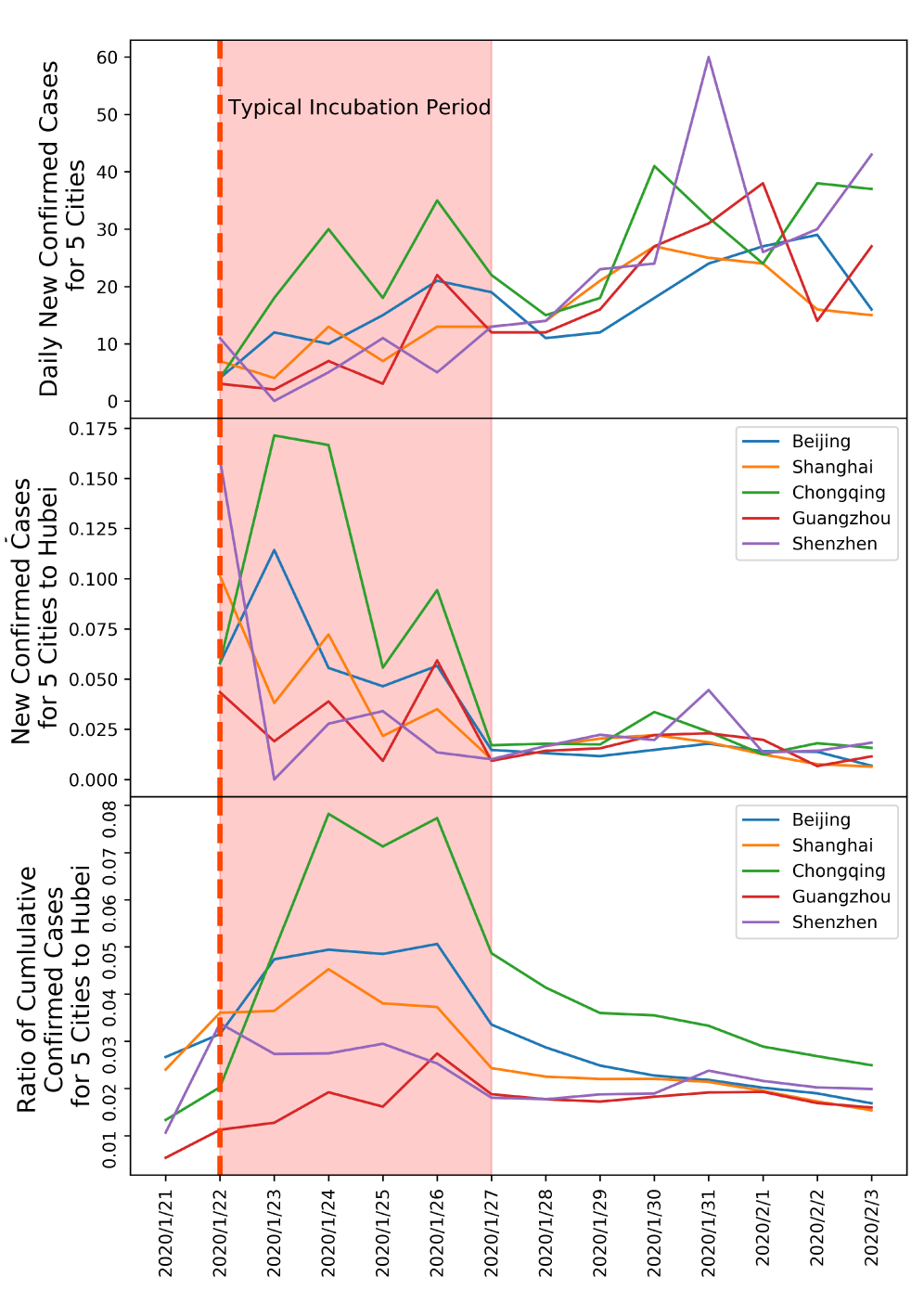 Here in South Africa we didn't listen, we lost precious time as for weeks we leaned on an economic argument. One which framed the advice to implement an immediate ban on international travel, as Hong Kong had already done, as a choice between a) saving an unknown amount of lives, and b) destroying a part of our economy. In reality this choice never existed. Instead what existed was the following choice, a) take the currently necessary measures to eradicate the virus at all costs, or b) don't. Let's take a look first at the do nothing approach.

Do nothing, otherwise known as Flatten the Curve

By "Do nothing" I mean all forms of action which allow the virus to spread to the majority of the population, at whichever speed. Yes, that includes Flattening the Curve. "Hold on", you say. I thought that was doing something. Well not really, usually when we speak about Flattening the Curve we are thinking about something like the roundly criticized policies implemented by the United Kingdom. Ones which essentially amount to slowing down the spread of the virus just enough to theoretically avoid overloading hospitals, while ultimately waiting on some combination of "herd immunity" and a cure or vaccine.

Why is this policy very dangerous? Well firstly, on herd immunity, as the criticism linked above points out:

"Individuals and scientists around the world immediately pointed out the obvious flaws: there’s no way to ensure only young people get infected; you need 60-70% of the population to be infected and recover to have a shot at herd immunity, and there aren’t that many young and healthy people in the UK, or anywhere. Moreover, many young people have severe cases of the disease, overloading healthcare systems, and a not-so-small number of them die. It is not a free ride.

This doesn’t even include the possibility, already suspected in some cases, of recurrence of the disease. Immunity may not even be reliable for this virus." - Nassim Taleb & Yaneer Bar-Yam

Secondly on a cure or vaccine, we have absolutely no guarantee that this will ever materialize. Many experts have stated this, but the sheer amount of viruses without vaccine's should make this fact immediately obvious. We may never have a Covid-19 vaccine!

The consequences of not doing enough

Lets start with a simple thought: How would your life be today if HIV was as contagious as the flu? If every person that has had the flu, also permanently has HIV. Do you think jobs in hospitality, retail, travel, entertainment, and many other fields would still exist? Would you go to the pub, or take public transport, if a cough could give you HIV? Of course not. In other words, there exists a situation where our entire economy as we know it ceases to exist, permanently, as a result of a virus.

What about Covid-19 though? Covid-19 isn't as serious as HIV. Yes, but it has the properties which means it can have an effect similar to the one in the HIV example, and we have already seen it have those effects. Firstly looking at its properties: It is extremely contagious, much more so than the flu. Think of how many times you, or people close to you, have recently had the flu. Now imagine something which you and your loved ones contracted about 2-5 times as regularly. Imagine that same disease had a death rate at least double that of Malaria (which has a death rate of 0.3%), and potentially as high as 20 times the death rate of Malaria. Add to that the potential risk of permanent damage to the lungs and brain. If going to a restaurant, or shopping in a mall guaranteed you would at some point catch this "super Malaria" (with no medication to prevent it). Would you go about your business, function in your local economy as normal? Even if you would, for there to even be a restaurant to go to, not only do you need to be willing to take that risk, the majority of the population needs to be willing to take that risk, and that is extremely unlikely to happen. We already have evidence of this all over the world, such as in Sweden where 70% of restaurants were already closed before a lockdown arrived. 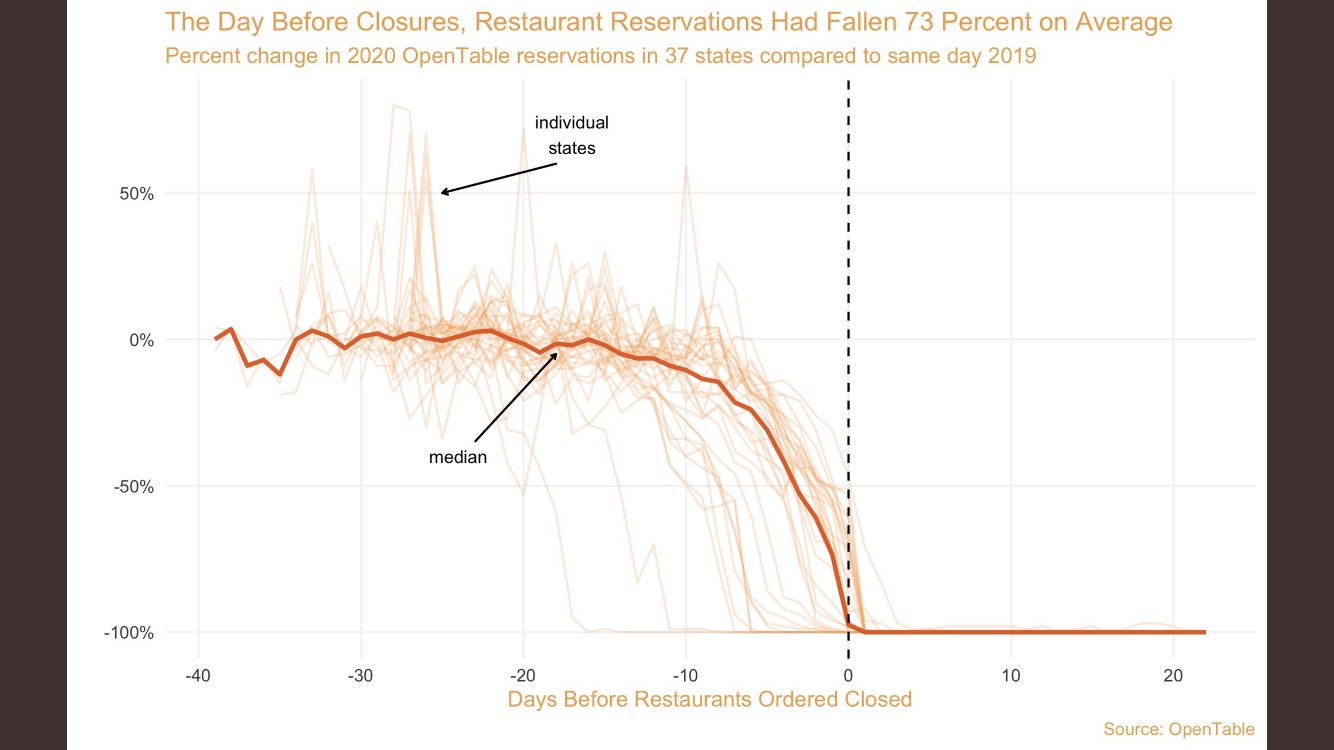 As things stand we have an incurable disease, with no vaccination available, with a significant death rate, for which we cannot achieve herd immunity, under the influence of which we have already observed the economy does not continue to function. In the end the answer to where we end up by doing nothing, or Flattening the Curve, is simple: we end up with no economy to speak of. By presenting a choice between harm to the economy, and the unknown amount of lives saved by lockdowns and travel bans, individuals like Knut Wittkowski, Dawie Roodt, Tim Noaks and Johan Giesecke are advocating hedging all bets on the appearance of herd immunity, a vaccine, or a cure. The problem is, we may never get those things. If we do, then of course everything immediately changes. Until then they are effectively urging and influencing large scale policies in a direction that asks us collectively to roll the dice. To suck it up, put not "only" millions of lives on the line (already too much to ask), but also the very existence of our societies and their economies. More dangerous and irresponsible arguments I cannot fathom. Those in positions of influence spreading these arguments are the gravest threat humanity faces today.

Again, as soon as we get cures/vaccines/a real way out, things change. It is the fact that they are arguing for these policies before we are there, and before we know if we ever will be there, which is so extremely dangerous and irresponsible. Especially because of the public response positions like theirs are already triggering.

Save the world, otherwise known as Crush the Curve

As illustrated in the previous section, the option of saving the economy without defeating the virus doesn't really exist. The natural next question is whether it is even possible to defeat the virus? If we as yet cannot count on the possibility of herd immunity, cure or vaccination, what hope is there even?

Well we know that travel bans work (as indicated in the Background section above), and this especially useful for every territory that so far has No Covid-19 Outbreak. But what about the rest? Well once they defeat the virus internally, the travel ban again becomes relevant for them, but yes until then we need much more. We need mass testing, we need anything that might help, we need masks, we need a full scale onslaught, most of all we need what we know works. A lockdown. There are various resources available on their effectiveness, but this NECSI one seems to be the most clear. 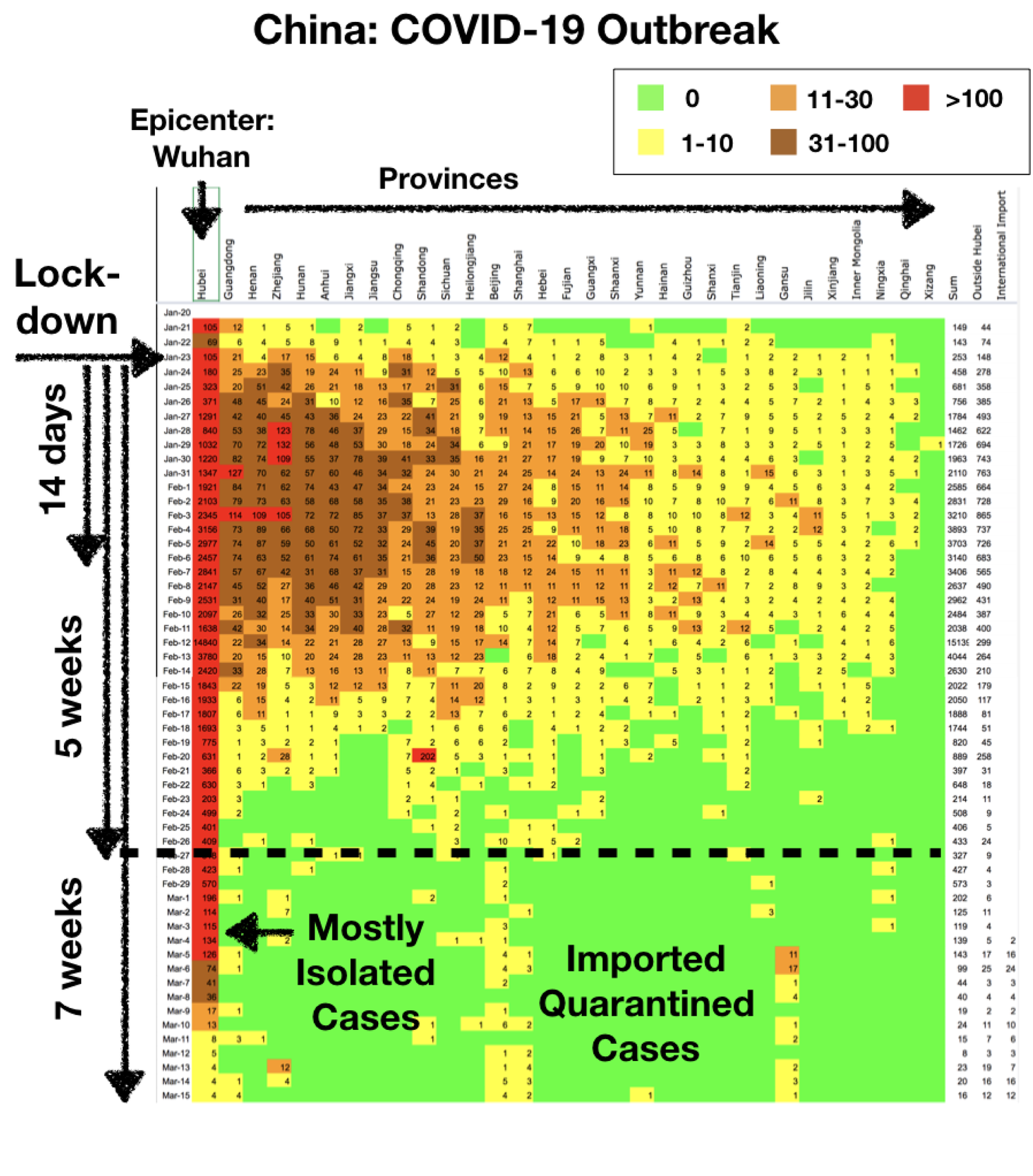 In the absence of herd immunity, cure or vaccination, we need to: logistically cut off the ability for the virus to spread between communities via travel bans, and we need to cut off the ability to spread between hosts within one community via masks and lockdowns. Strict lockdown is the only logistical method that has proven to achieve this emphatically. On top of that due to the exponential growth present in a pandemic, ever day we waste has an exponentially higher impact. As illustrated by the 100 times worse outcomes in Spain compared to Greece, where lockdowns and travel bans were implemented a mere 2 weeks earlier. 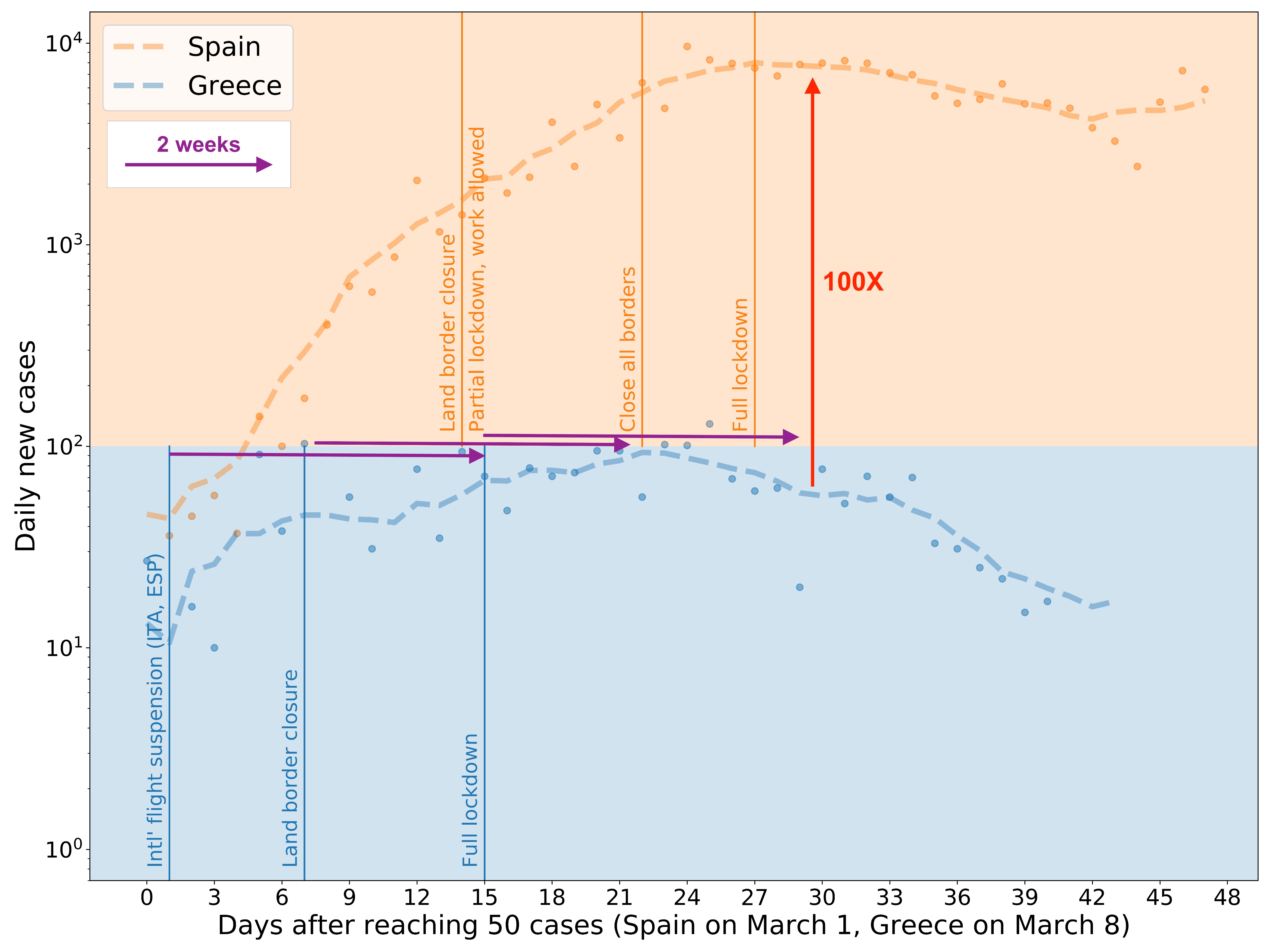 Implementing and supporting a lockdown here in South Africa is paramount, not only to save lives, but to save our economy. We listened to the illusion of an "economy vs lives" argument in February when we decided against an immediate travel ban, our country paid with lives and part of our economy. Now some are urging us to roll the dice with yet more lives and livelihoods. I feel it my duty to oppose this position as strongly as I possibly can.

I made a tool for tracking the pandemic.

Along with that here are some great resources on the Covid-19 Pandemic: